On December 3rd, 2019, the FUNDEA's Executive Secretary presented the different actions carried out by the ARMOUR project at a seminar on “Youth and Prevention of Radicalization in Morocco”, organized by Casa Árabe and CIDEAL Foundation in Madrid, Spain. The audience was given the opportunity to discuss concrete experiences, use cases and potential developments with respect to international cooperation in the field.

The seminar took place in the premises of Casa Árabe and tackled the phenomenon of radicalization and its prevention. It covered two different sessions: the first one dealt with the radicalization process and various prevention strategies, while the second one addressed the issue of preventing radicalization. The contribution of Inmaculada Marrero Rocha, FUNDEA's Executive Secretary, took place in the second session, titled “Experiences of Interest about the Prevention of Radicalization”, which she shared with Prof. Hana Jalloul, Carlos III University, Daniel Pelufo, Member of CIDEAL Foundation and Coordinator of the AECID Agreement in Morocco and Julio Andrade, and Malaga Mayor’s Office Advisor in Foreign Action and Development Cooperation. 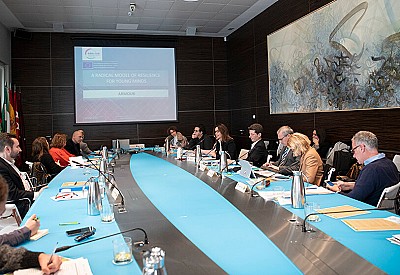 In her speech, Inmaculada Marrero addressed the phenomenon of radicalization among young people following the findings of the ARMOUR research activities. The project analyses support the design of an interdisciplinary learning model to build resilience to the ideologies and specific behaviours of violent extremism.

More information about the event can be found here (in Spanish).